Giving Back in Bangalore

I have just returned from a week in Bangalore, India after volunteering my time and expertise in video production at the Joomla World Conference. Working a conference is a fun experience...working it on the other side of the planet is a whole different ball game.

The Joomla World Conference is a yearly event focusing on all things Joomla. Users and Developers of all levels are welcome and it's a great way to connect with the Joomla community. Being in Bangalore, India added a few challenges, namely getting there and getting used to the time difference. Being basically on the other side of the planet from me, it took several 8 hour flights and an 11 and a half hour time difference to get there. The Jet lag wasn't as bad as it could have been, mostly due to me being able to get some sleep as soon as we arrived at the hotel. I managed to get about 5 hours of sleep and then it was time to get to work on the conference setup.

My role at JWC15 was to manage all the video. This meant making sure the video capturing setup was working correctly in the 3 breakout rooms and setting up a video switch in the main ballroom. I also worked closely with the local Indian production team that was hired to man the cameras. They set up the cameras, sound and stage, and I set up my video area and made sure everything worked correctly. 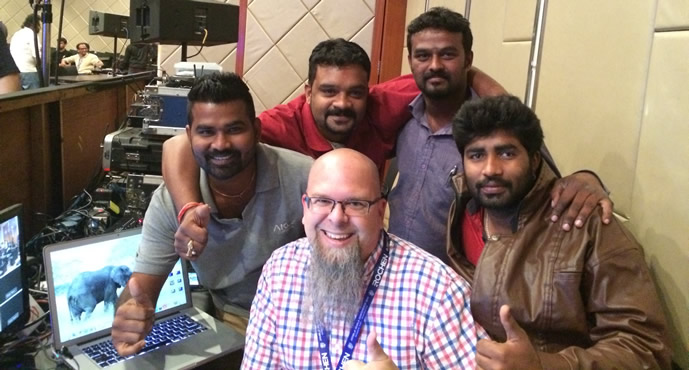 We did run into a few snags. When working with video gear, there's always something unexpected. In this case, it was a mix of the cameras and the HDMI video splitters the production company used. Because we weren't in North America, the video standard is PAL instead of NTSC. That meant the frame rate was 50 instead of 60. This wasn't an issue until we tried to interface the presenter's laptops into the system. 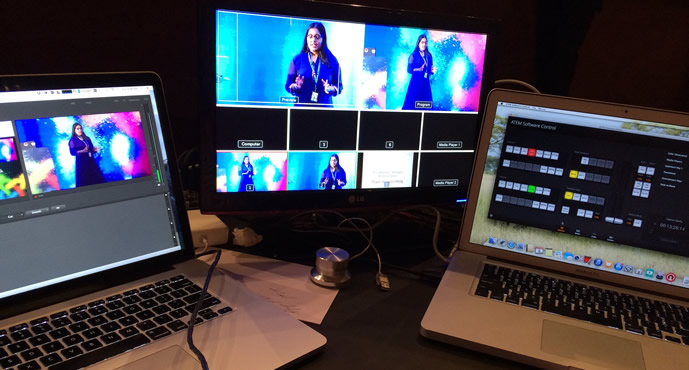 My view for most of the conference

And this...is where my love of all things Apple paid off. It seems setting a mac to output 1080i/50 is pretty easy, but I never did figure out how to switch any other brand of laptop from 1080p to 1080i, so we were unable to capture the output of anything but the Macs into the system (they all went to the screens, just not to the capturing system). Regardless of the technical glitches, everything else went pretty smoothly, and the sessions themselves were great.

Check out all the sessions on the Joomla Youtube Channel JWC15 Playlist.
(Videos are being uploaded as they are finalized, everything should be uploaded by the end of November, 2015)

On the last day of the conference I actually gave a session. The session was titled "Why doesn't my site look like the demo!" I've embeded it here so you can watch it.

Since I tend to create sites using commercial templates, I like to start with their demo and then strip away anything that I don't need. Inevitably things will go wrong. Menu items don't fit, or fonts are too big. I also like to completely learn the framework and goodies included in the template so that I can fully use the tools it comes with. Basically, I let the template do the work for me. I did a quick overview of this in my session. Thankfully I got time to practice before hand and the session went fairly well, though I wish I'd had a bit more time to cover more stuff in more detail. Overall though, it went well.

The conference itself was a great experience. The sense of community was very strong, and everywhere I went people wanted to talk to me about what I do and where I was from. The people of India by nature are very social and service oriented, and the fact that the majority of attendees were locals made the sense of family even stronger. Even as an introvert, I felt at home and enjoyed hanging out with the large groups during the meal times.

In fact, the only reason I skipped out on a few social gatherings is because I was either busy with video duties, or I was so tired I just couldn't stay awake any longer. Even then, I did manage to stop at all the booths and talk with people I'd never met before during meal times.

The event sponsor's and other Developers in attendance also contributed to a good time at the conference. I met people from TechJoomla, Joomshaper, ThemeXpert, 123RF, StackIdeas (they make EasyBlog, the extension I use for this blog), RocketTheme, Joomlart, JoomlaShine, SiteGround, CloudAccess, RedComponent and others. It was wonderful to actually meet the faces behind some of the products I use and recommend.

Overall, this conference was a great experience and one that I plan to do again next year in Vancouver, BC. The sessions were informative, the people were friendly, the atmosphere was inviting and it made me proud to be a part of the Joomla community.

The entire trip was capped off with a day tour to a remote waterfall and an ancient temple (now just a museum). So after spending several days in a modern hotel, I got a chance to see the real Indian country side, complete with cows, carts filled with sugar cane and wild monkeys. After that I was able to sleep in a bit on my last day and prepare myself for a 16 hour flight home. 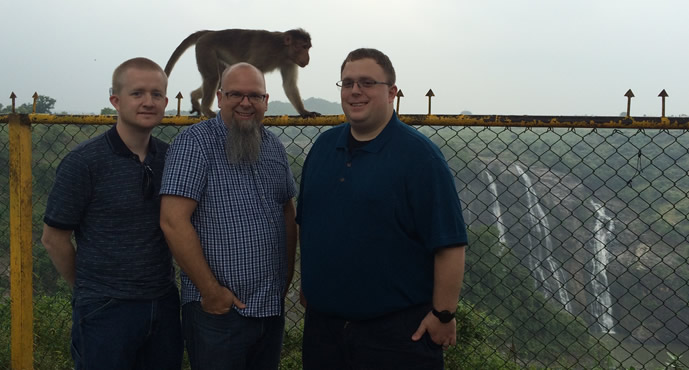 A wild monkey hangs out behind us.

If you've ever thought about attending a Joomla confernce, do it. There are smaller Joomla Day conferences held all over the world, and two large conferences held every year-Joomla and Beyond and Joomla World Conference. Even if you're an introvert, get out there and meet people. It's worth the experience and you'll make some great friends you may have never met otherwise.

Other Sites of Interest

@paramountplus Signed up for the free trial, then saw there was a birthday promo. Switched to the premium version a… twitter.com/i/web/status/1…

Follow @peatcreative on Twitter
This site uses cookies for basic site analytics. All data is annonymous and is not harvested for any other purpose.
Learn More